Devon, PA – May 28, 2015 – AliBoo Farm’s crop of young horses jumped to the top of the leader board in the Five-Year-Old and Six-Year-Old classes at the historic Devon Horse Show this week. Years of planning and investing in it’s breeding and training program coupled with training by the AliBoo team, are reaping big rewards for the family business.

AliBoo’s riders, Taylor and Alison Flury, piloted their stock to be the only horses to jump clean in Wednesday’s class. AliBoo’s Catania Saflo Z (Chippendale Z x Landor S) had a clean round and their Diamant D’Heure ABF (Diamant de Semilly x Rio Grande) followed right behind with another clear round. Cosmea Z (Calvados x Lupicor) put in the third clear round while AliBoo’s Carrasca Z (Asca Z x Calato) was the only four faulter in the class. The remaining five-year-olds had eight faults or more.

In the competitive Six-Year-Old class, Jett B owned by Iconic Bay Equestrian, went to the head of the class. Jett B shut off the timers with quickest round of only four horses to go double clean over the Michel Vaillancourt designed track. AliBoo Farm has been bringing along the Belgian Warmblood stallion (Simsalabim x Chin Chin) for about a year now for the owners. 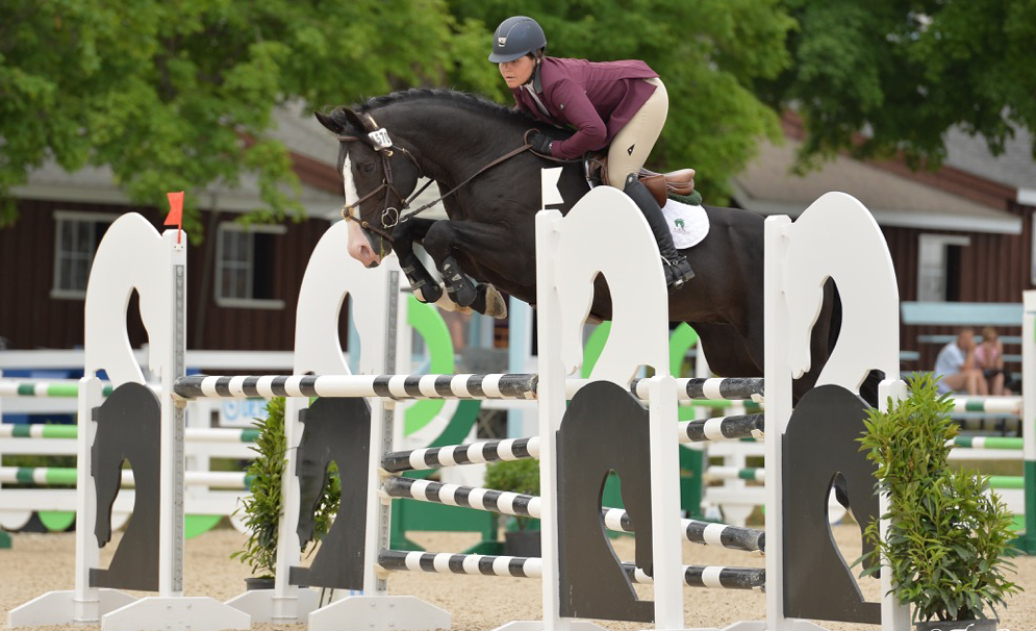 Taylor Flury piloted Iconic Bay Equestrian’s Jett B to the win in the Six-Year-Old Jumpers at the Devon Horse Show. Photo The Book LLC

Thursday proved the consistency of the team as Catania Saflo Z put in a clear round once again in the second class of the Five-Year-Olds.  Carrasca Z also jumped clean again for AliBoo in the class, which was an East Coast Young Jumper Qualifying Class.

“AliBoo Farm is creating it’s niche in the young horse world and it is something we’ve been working toward for years.” said Taylor Flury.  “We are a boutique operation and I love trying to find that special horse or exclusive bloodlines, such as the ones we have on the ground this year, which include; Cumano, Presley Boy, Chacco Blue, and a foal out of a Casall mare.  I’m so proud of the horses and the AliBoo Team. All of our hard work and patience is finally coming together and we could not ask for a nicer group of horses. Our young horses are growing up and reaching an age where they can begin doing things. All of these young horses we either bred or purchased as young weanlings and we have been patient and developed them ourselves.  We could not be here winning without the wonderful team we have at home handling the horses there and I am extremely grateful to them. We are also fortunate and excited to have recently begun relationships with Equiline and Malvern Saddlery, as their sponsorship and support will undoubtedly add value to AliBoo’s programs.”

AliBoo takes pride in the development and training of young horses and have had great success with not only their own horses but also with young horses owned by others such as Iconic Bay Equestrian out of FL, and Blue Gate Farm (Denise Wilson). Some of the horses they have brought along include Role Model, who won a Lake St. Louis Grand Prix this winter after being the Five and Six-Year-Old National Young Jumper Horse of the Year, Clever Girl, who has been a consistent winner in the Junior Jumper Ring during WEF 2015,  and Corcovado BG, who is also earning top ribbons as a young jumper in the Midwest and Wellington.

Along with starting and training, AliBoo Farm does extensive research on bloodlines. Their stallion, Diamant d’Heure ABF won the coveted American Best Bred Horse at the Spy Coat Young Horse Show Finals in 2014. It was here that Carrasca Z earned a perfect score of 10 in the free jumping chute. He is the first horse to earn perfect 10’s across the board in the program. AliBoo offers both breeding and breeding consulting services.

“We like to help people make smart investments when it relates to their horses,” said AliBoo Farm owner, Janet Flury. “We are happy to educate owners interested in breeding so they get the best buy for their money and get a quality horse. Our complete program of breeding, developing and training is working and we’d like it to work for others as well. We focus our energies on starting horses for riders, rather than being a training and boarding facility for riders.”